Our ten days of recuperation from Bentley has proved just the medicine. We farewelled Gate A, 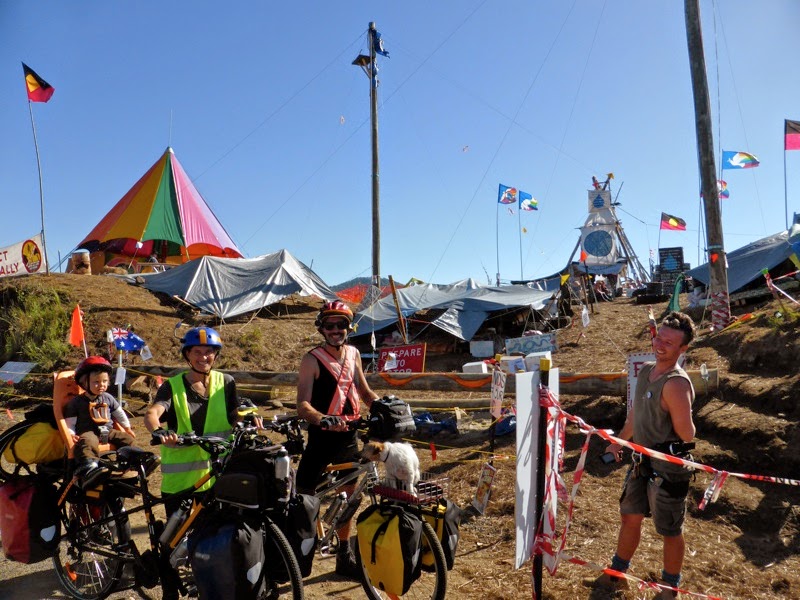 and rode east with an invitation to stay with a fellow Bentley protector, Dr Phil, in Ewingsdale. 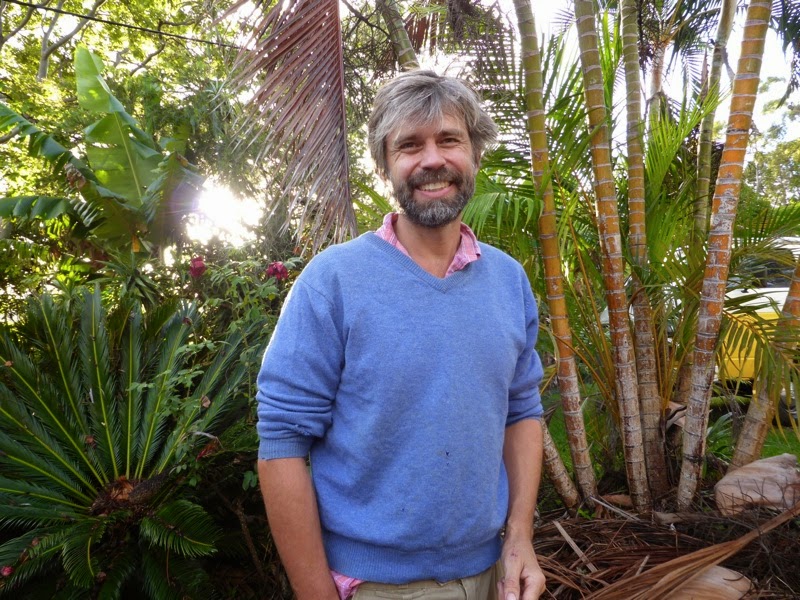 After riding 50ks or so we broke the trip in Bangalow, a pretty town that has been recently infected by a boutiquey city snobbery. Before nightfall we raised our tents behind the toilet block in a local park to create this rather bourgeois accommodation, 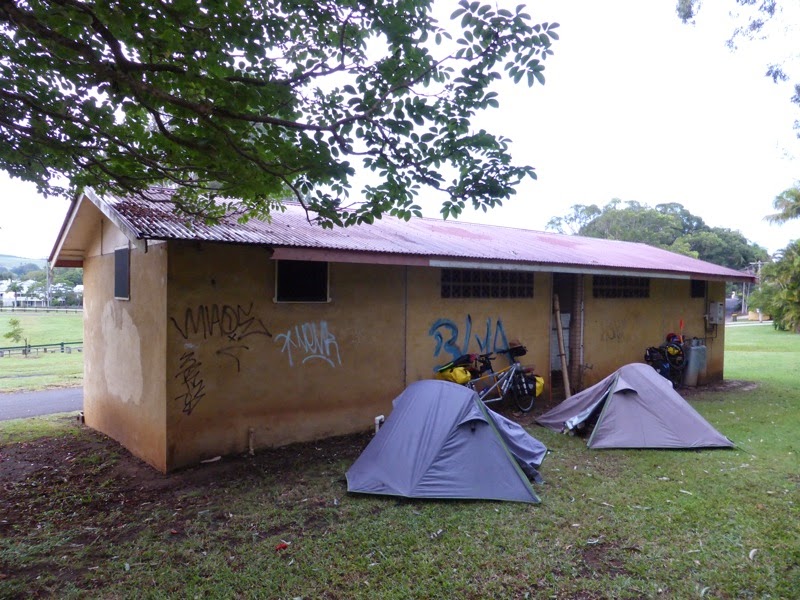 before heading to Phil and his partner Natalia's the next morning. On the road to Ewingsdale we spotted Australia's most eastern point, Cape Byron. What pastoral splendour! 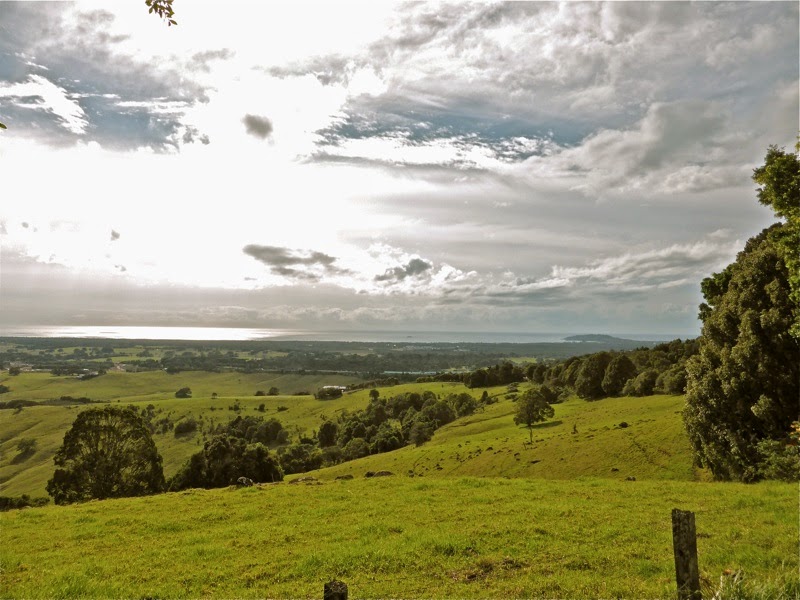 We have come to understand the wondrous luxury of a warm shower, and at Phil and Natalia's we certainly experienced this warmth, alongside others. We were treated to a locavore feast, with much of the ingredients coming directly from their family's produce garden. 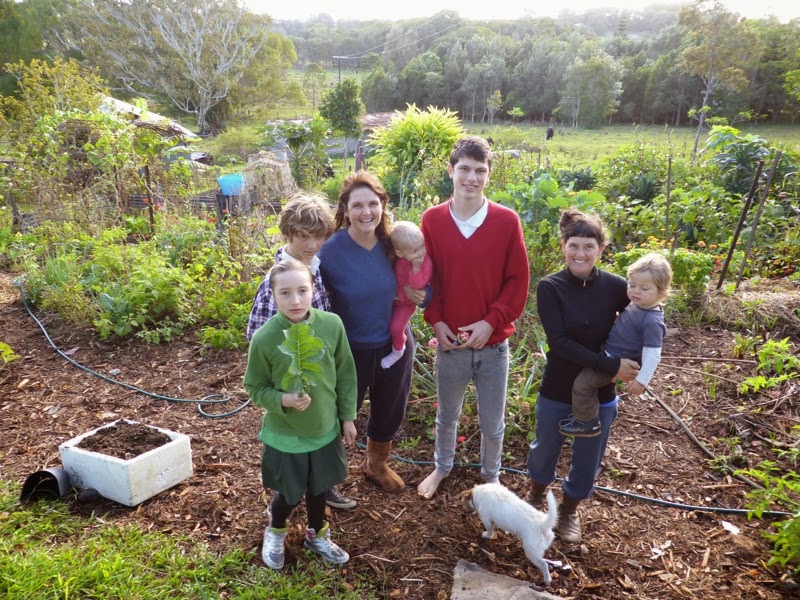 Meet (from left) Casuarina, Pandanus, Natalia, baby Melaleuca and Xanthorrhoea, with Zero, Meg and Blackwood. We found we shared many common things, such as a love of music, permaculture, eating local, eating weeds and giving our children Indigenous tree names. On a wet and stormy day Phil and Natalia kindly loaned us their car and we shuttled down the hill to nearby Byron Bay to visit the markets, 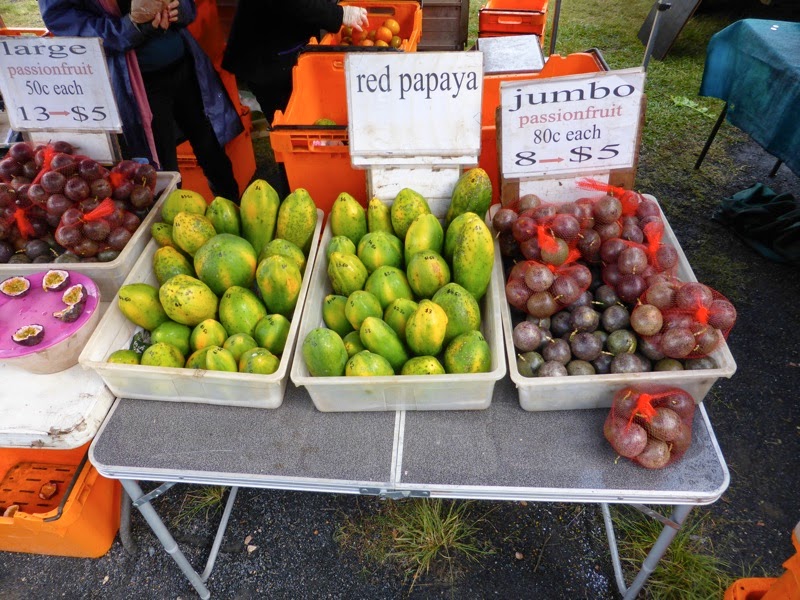 discover fruit and vegetables we just don't see back home, such as these winged beans, 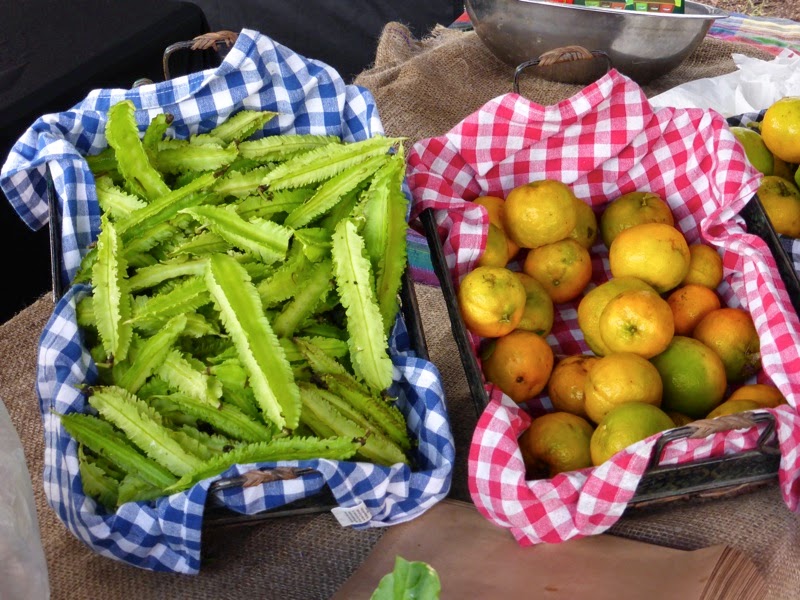 and visit an old friend, Bridget, in her studio before she cooked us a delicious meal. 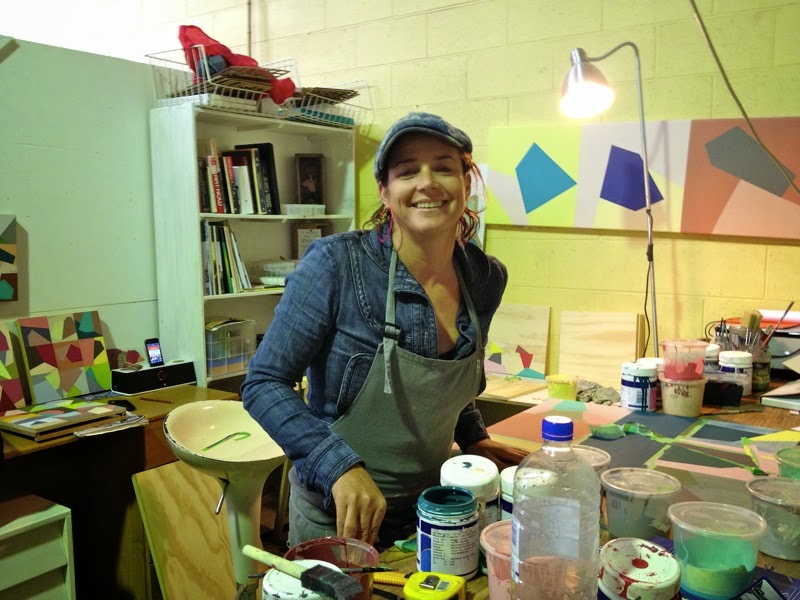 We can see why this beach town is a significant destination on the tourist map, 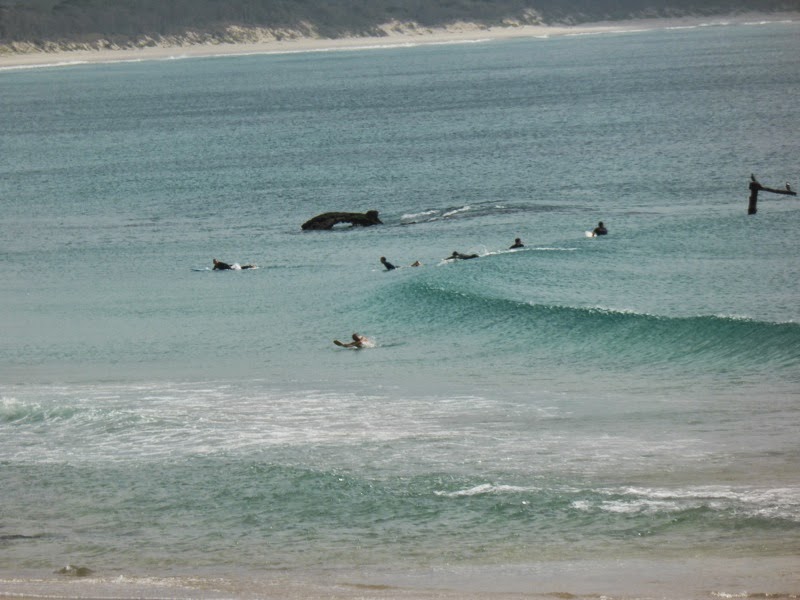 but brand Byron seems to us a victim of its own success. We were pleased to get out of this high consumption rat race and find the road to Mullumbimby, where 10ks out we picked up Dee, our very first hitchhiker, needing a lift into town. 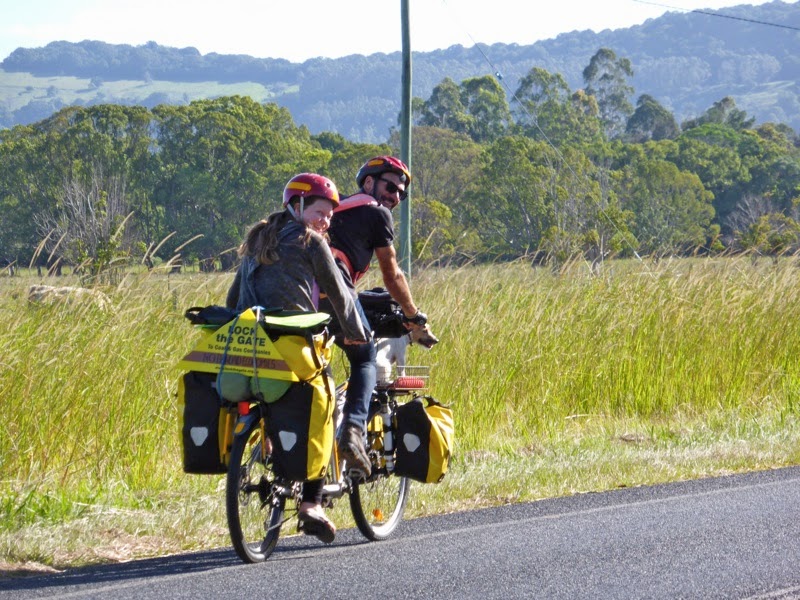 We came to Mullum to stay with our friends Chris and Vanessa and their boy Willem and pooch, Bella. 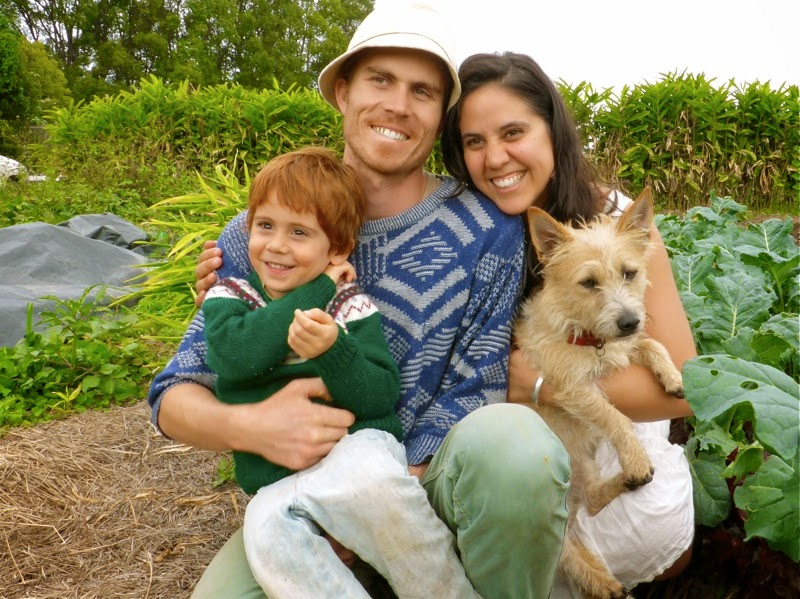 It was in Mullumbimby that we were treated to more delicious and nutritious local food. We rode straight to the weekly produce market, bought some produce for the week and ate starfruit on the main drag, outside the organic and GM-free food shop, Santos. 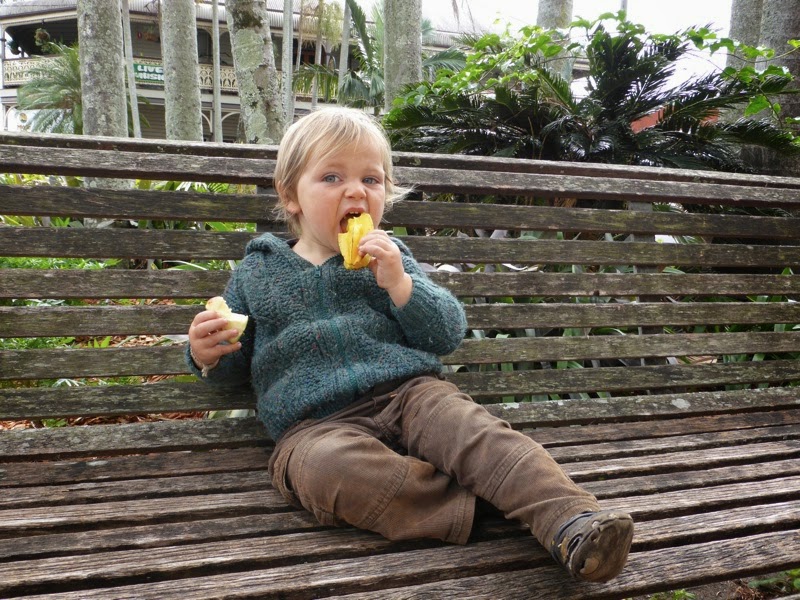 We devoured red papaya at the Mullum Community Garden (MCG), 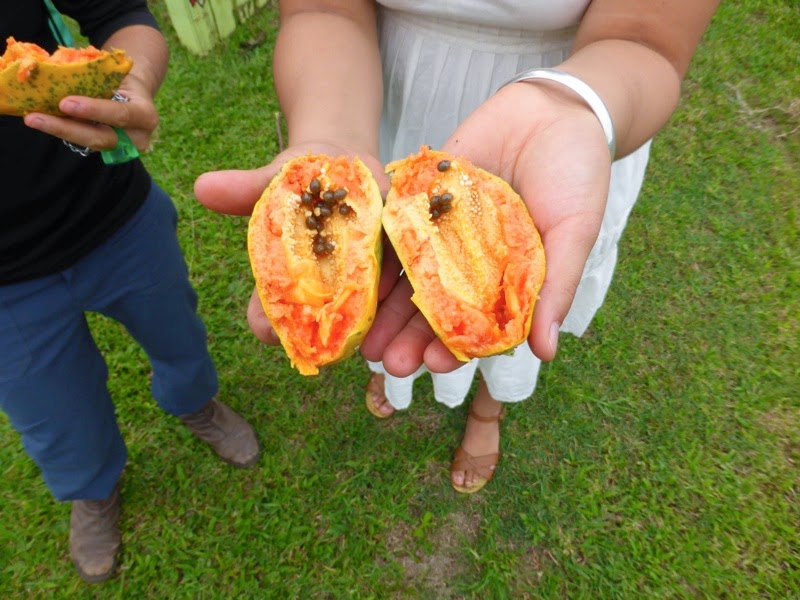 and chewed on red sugarcane at Chris and Vanessa's family plot there. 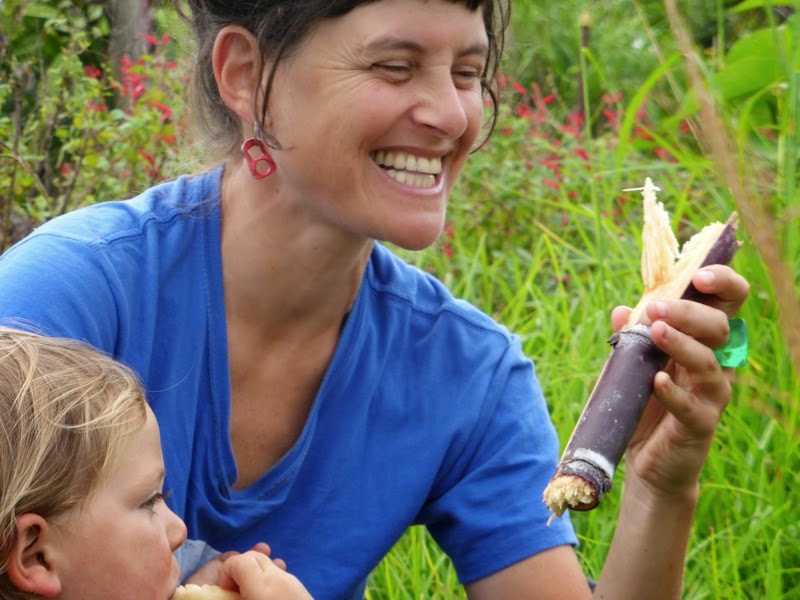 Back at Bentley a few weeks earlier, Artist as Family participated in a biochar workshop with a guy called Don, who explained the fundamentals (and indeed imperatives) of turning woody biomass into biochar. 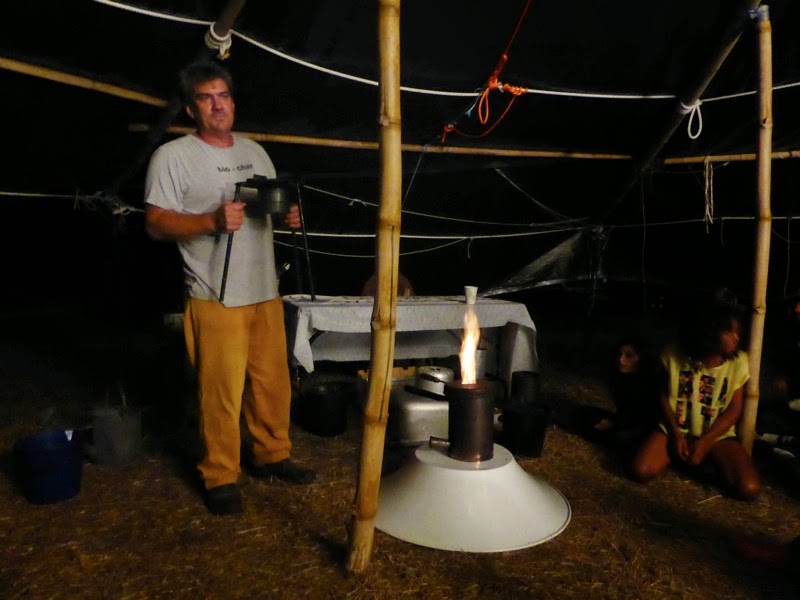 Don and his co-conspirator, Wadsie, run a demonstration biochar site out of MCG, and it was great to see the set up on a larger scale. 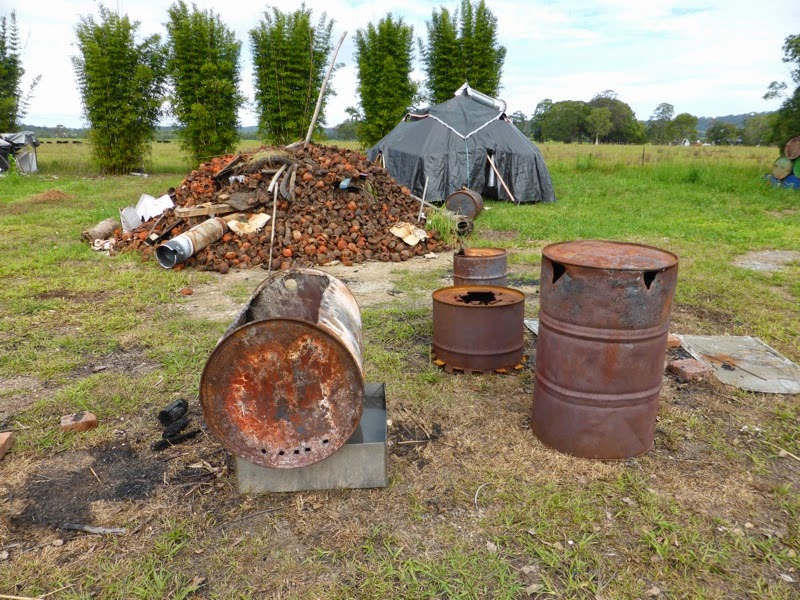 Assembled and used correctly this rather humble looking array of drum furnaces can burn woody material considerably cleanly and can, according to Don, produce a by-product (charcoal) that can put carbon back into soil for millennia. And while it's true around 50% of carbon is given off into the atmosphere at the charring stage, the remainder becomes more or less permanently sequestered producing an ecological soil product that can house beneficial microbes, help retain water and enable aeration. When ordinary biomass decomposes (or composts down) virtually 100% of the material is quickly given off as methane gas with little benefit to soil composition after a few years.

Another thing raised in discussions at Bentley that came to fruition for us in Mullum was a letter to elders. When we walked to Melbourne a few years ago we wrote to the elders of the three nations we were to pass through to seek their permission. This time on bikes, we thought we'd stop at Indigenous cooperatives along the way to seek permission as we didn't have a predetermined route worked out. But it hasn't really worked out that way, so now we think it time again to start sending a letter ahead of our arrival, and this is what we penned: 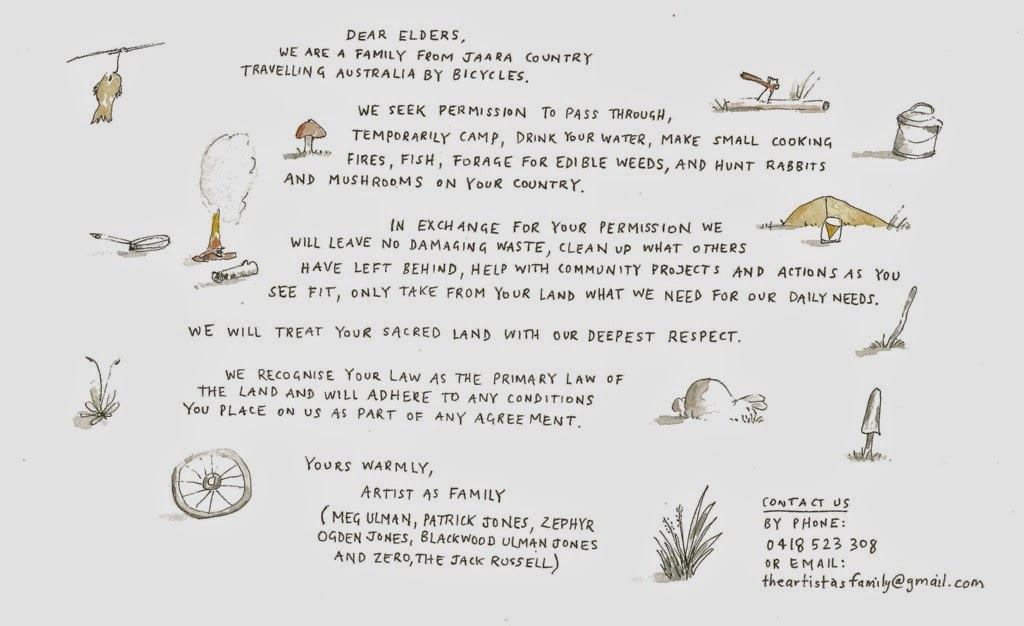 Roman law only got established in Australia because of that convenient Latin term terra nullius, but our letter to elders recognises Indigenous law as the 'primary law of the land' and is modelled on what Jaara elder Uncle Brien Nelson (back in our home country) tells us is called the tanderrum or 'freedom of the bush'. A tanderrum agreement occurs when land holders give foreigners temporary access to their country and resources. The only reason Roman law remains in Australia lies with the pointy bit of the law – the shooty bit. The gun remains the final line of authority in a morally impoverished legal system and a morally corrupt political system that has never properly defended Indigenous culture, the land, its creatures and its people (Indigenous and non-Indigenous) from the terrorism of greed that masquerades as economics. Without guns and greed to threaten us, the enormous effort it has taken to protect Bentley would not be necessary. 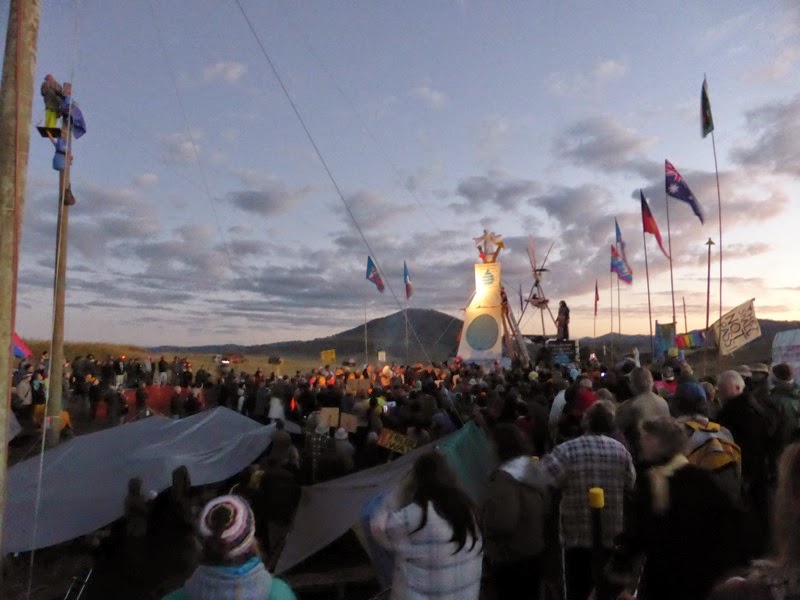 Our host, Chris, teaches permaculture design in Mullum and asked us to give a talk to his PDC students on 'permaculture travel' and on applying permaculture principles to all aspects of life. We spoke about our reasons for living car-free and the importance of understanding the impacts of fossil fuels and their subsequent wars, from 1914 onwards – the Berlin to Baghdad railway to the present day Bentley blockade – and what we are doing to work against this culture of violence and damage and perform non-damaging life ways. 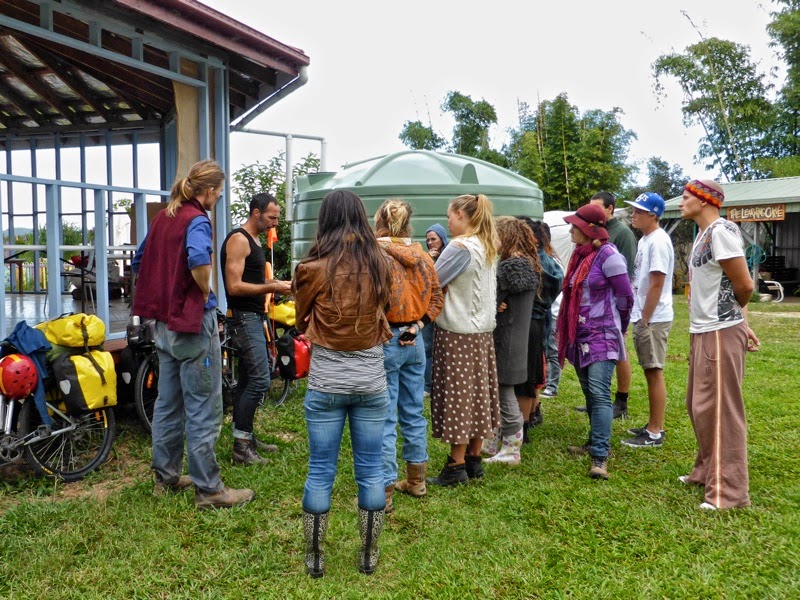 We're getting ready to leave Mullumbimby and ride back to Bentley. It looks like a large force of police will soon attempt to dismantle the blockades set up there, and with the pointy bit of an illegitimate legal system aid the negligent company Metgasco to build its Northern Rivers gasfield. We will defy this violence with large numbers of good folk and clear-eyed song:

hey there officer!
protect the protectors
our water, land and air
Posted by Artist as Family at 11:13