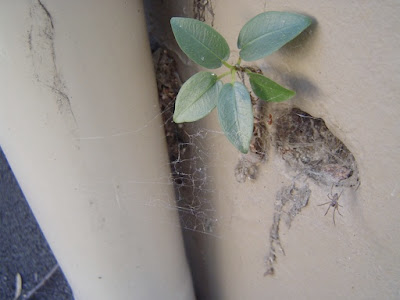 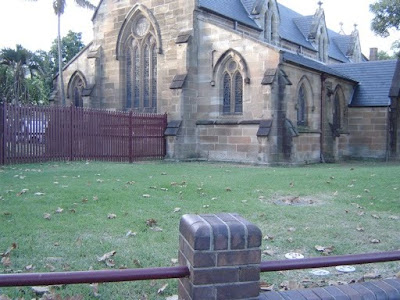 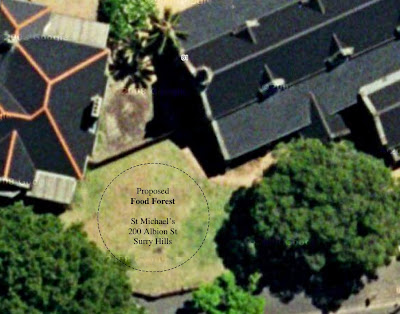 If you're in the area on Friday, come by and say g'day to Patrick at UTS. We'd love to hear your tips on what specifically keeps your garden or local environment full of wild love and reciprocity.
Posted by Artist as Family at 19:22 3 comments:

"No, no, no sickness really, only clean one. Because they lived on wild honey and meat. They have been living on bush tucker. Nothing. No tea, no sugar, no ice-cream or lollies, nothing. Only been living on bush honey, bush tomatoes, bush raisins, edible seeds and grass seeds. Any kind of seeds. They lived on yams. No sickness. Nothing, all good. Nothing, they were good living in them days. They only got sick from a cold. Only catching a cold, that's all. No more. No sickness, nothing. Because they living on different food. Yeah, different food bush tucker".

"According to the archaeological evidence, [early] farmers were more likely than hunter-gatherers to suffer from dental-enamel hypoplasia – a characteristic horizontal striping of the teeth that indicates nutritional stress. Farming results in a less varied and less balanced diet than hunting and gathering does... Farmers were also more susceptible to infectious diseases such as leprosy, tuberculosis and malaria as a result of their settled lifestyles... Dental remains show that farmers suffered from tooth decay, unheard of in hunter-gatherers, because the carbohydrates in the farmers' cereal-heavy diets were reduced to sugars by enzymes in their saliva as they chewed. Life expectancy...also fell... The settled farmers are invariably less healthy than their free-roaming neighbours. Farmers had to work much longer and harder to produce a less varied and less nutritious diet, and they were far more prone to disease".

Some notes on the food forest:
1. Create many habitats for predators, such as lizards and frogs.
2. Create a site of intense biodiversity – flora and fauna – to help allay pests.
3. Allow fruit, nuts and berries not consumed by humans or non-humans to be left to compost on the forest floor.
4. Allow plants to seed, fruit and regenerate naturally by open pollination.
5. The food produced must remain uncapitalised and free from pesticides and other synthetics.
6. The intent of the forest is to trigger a foraging vibe for humans and non-humans local to the site.
7. To design the forest so it becomes self operating, self feeding and self watering.
8. Combine indigenous and exotic flora.
9. Create a 'green pharmacy' with many herbs.
10. Plant companion plants in close proximity to one another.
11. Bring in much biomass, top soil and compost to help create an organic base for the site.
12. This work is a fabrication, an artwork, based upon biomimicry. It participates in what it represents: a reunion of the conceptual with the corporeal; the mind with the body; man with woman; human with non-human; food with ecology; poetics with pragmatism. 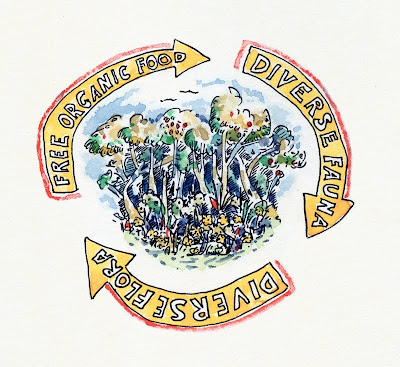 Letter of support from David Holmgren

My support for this project comes from my expertise in the sustainability of our food supply system and positive design based responses at the household and community level that rebuild local, low impact ways of providing food. David Holmgren.

Read on by clicking on this image. 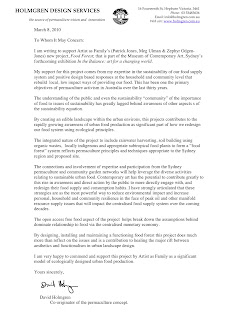 Posted by Artist as Family at 12:02 No comments: 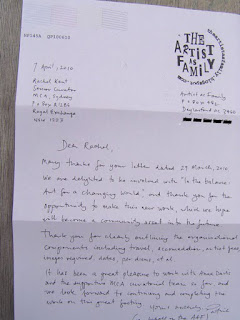 Click for bigger.
Posted by Artist as Family at 11:59 No comments:

The ontological shift for an ecologically sustainable future has much to gain from the worldviews of ancient civilisations and diverse cultures which survived sustainably over the centuries. Vandana Shiva, Staying Alive: Women, Ecology and Development

Thanks for this Detroit link, Anna. We've now watched Requiem for Detroit too. Bonza!
Posted by Artist as Family at 16:25 1 comment:

Please come along to this if you're in Sydney on April 30. Patrick will be outlining our project to date. 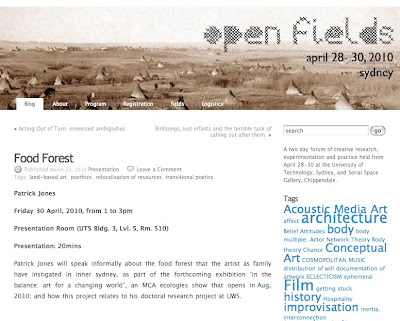 Click for bigger.
For more info go to Open Fields.
Posted by Permapoesis at 11:23 No comments: