One rule he [Oodgeroo's father] told us we must strictly obey. When we went hunting, we must understand that our weapons were to be used only for the gathering of food. We must never use them for the sake of killing. This is in fact one of the strictest laws of the Aborigine, and no excuse is accepted for abusing it. –– Oodgeroo Noonuccal (Minjerribah elder)

We have had a wonderful week and more on Minjerribah, sampling Quandamooka bush tucker and being the biological (not chemical) controls of more newly naturalised autonomous foods (agricultural weeds, etc.), while hiding out in the bush. It is early winter on the island and at this time of year, like home in cold highlands Victoria, chickweed (Stellaria media) commonly appears, packed with vitamin C at a time when it is most needed. Clover is also pictured below and is also edible in salads; the flowers used for tea. 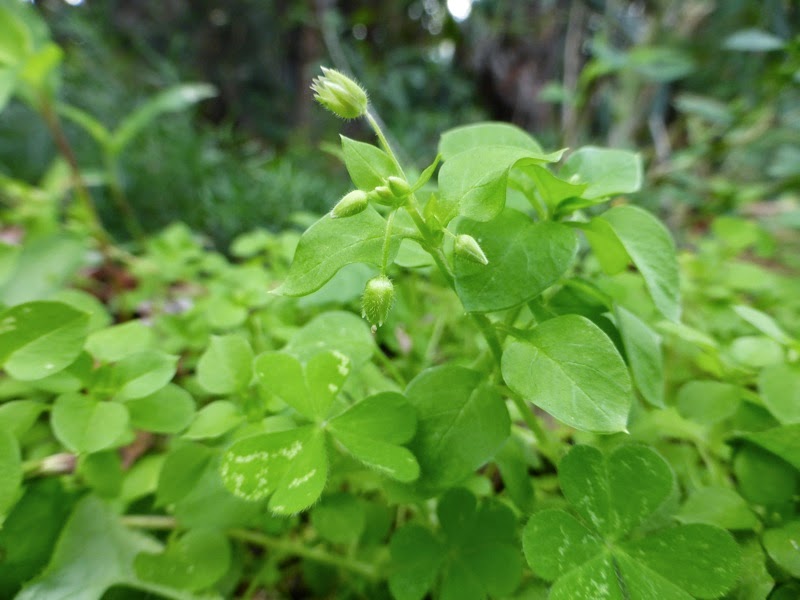 And while chickweed is just appearing we foraged the last of the season's apple guavas (Psidium guajava), 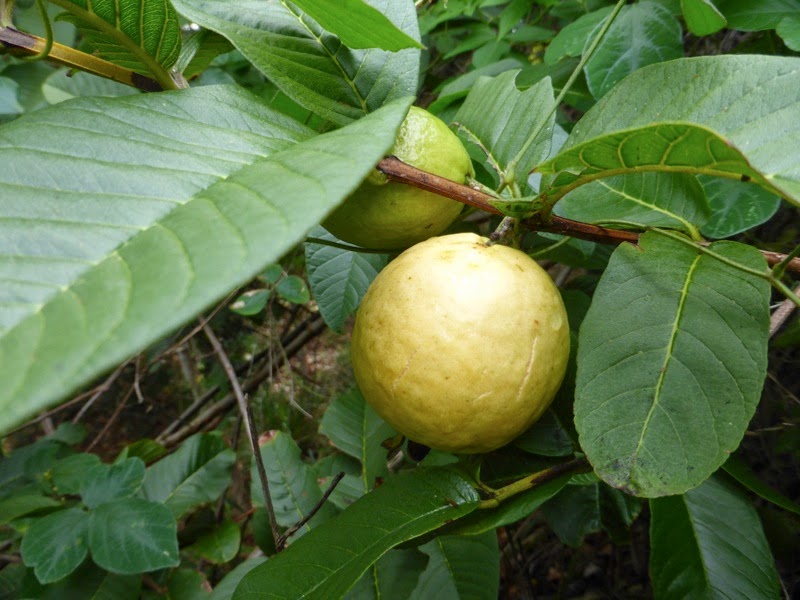 Even though none of the delicious red sweet-salty fruits of pigface (Carpobrotus glaucescens) were about, some flowers were present, 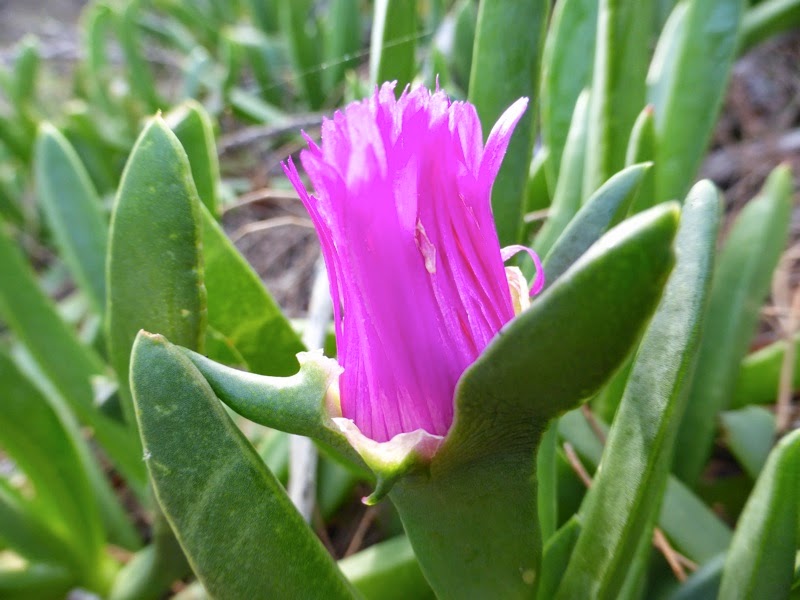 and biting the base of these flowers, where the fruits will later form, can offer some small delight. 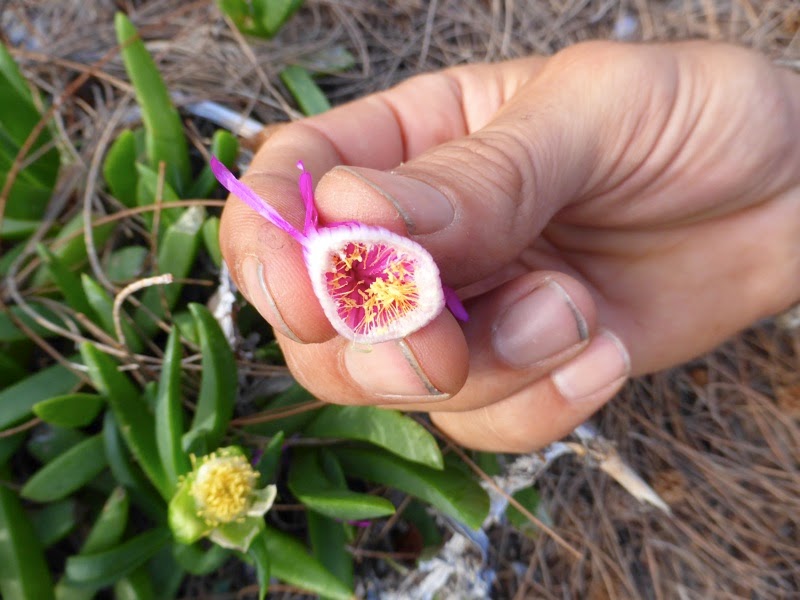 Like home, black nightshade (Solanum nigram) berries enjoy the cooler weather, a favourite of Woody's on the island. 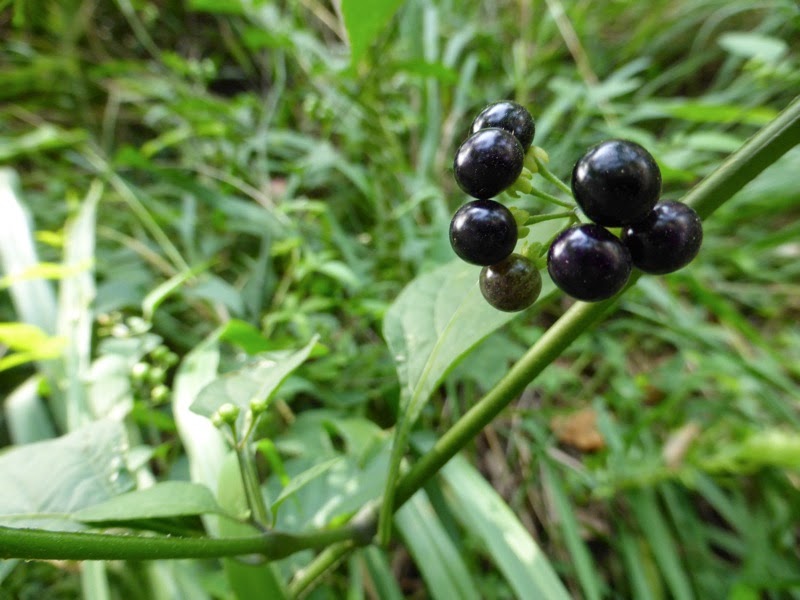 And we tried beach flax lily (Dianella congesta) berries and weren't unimpressed, even though the Quandamooka people apparently didn't eat this food. 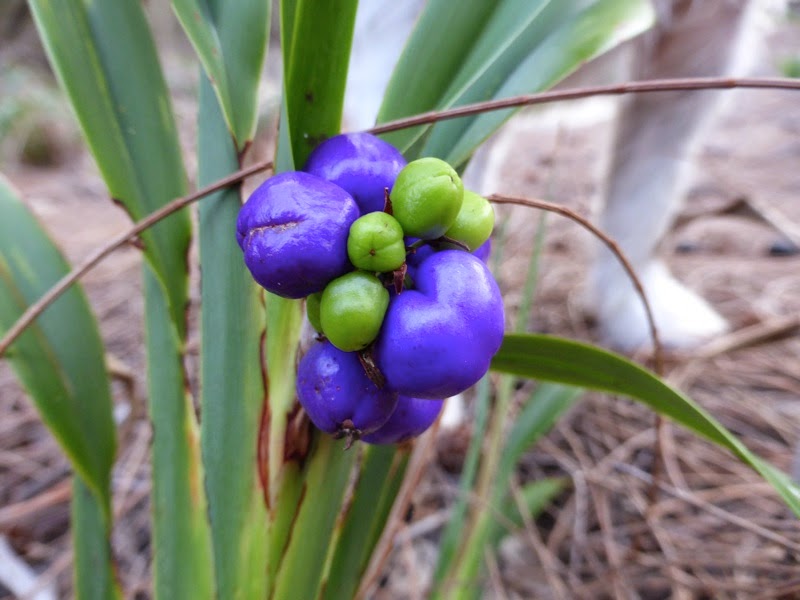 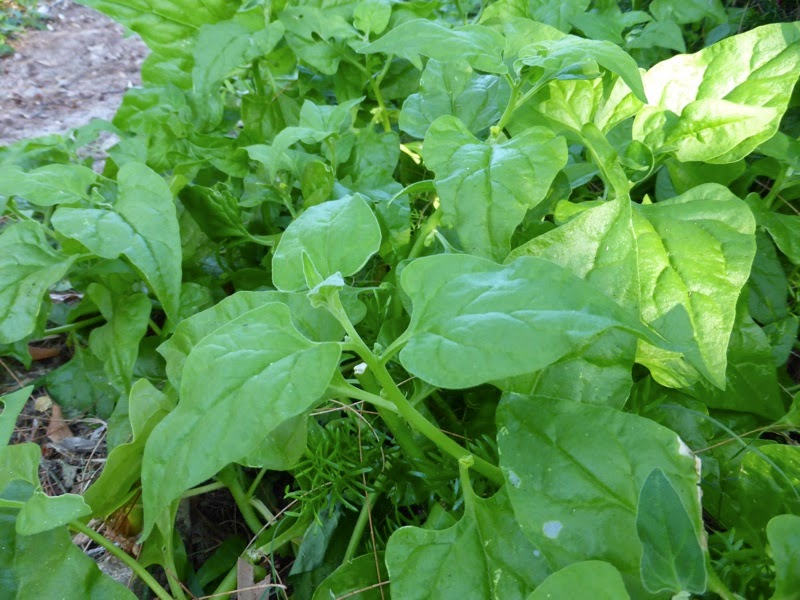 
And we tried chewing the ripe fruits of Pandanus (P. tectorius), 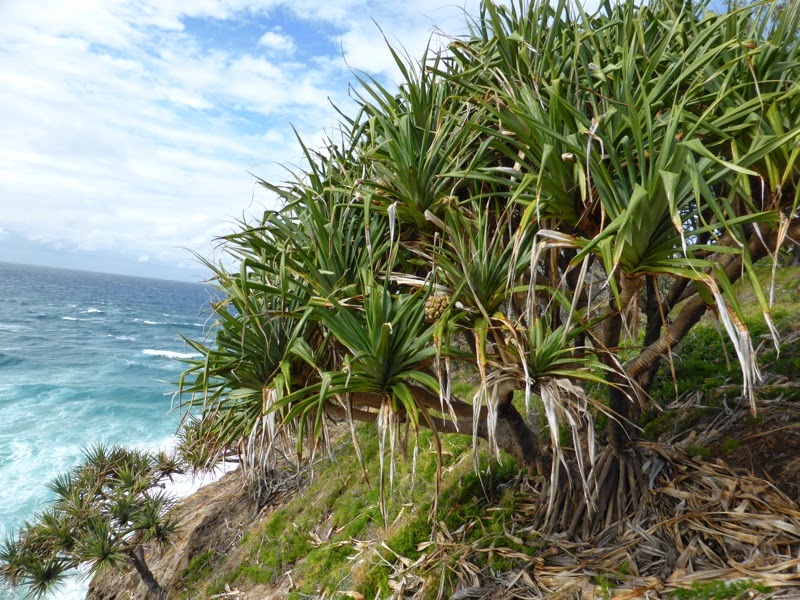 at first raw, which irritated our throats, then roasted on coals, with wave-washed-in pilchards (Sardinops neopilchardus). 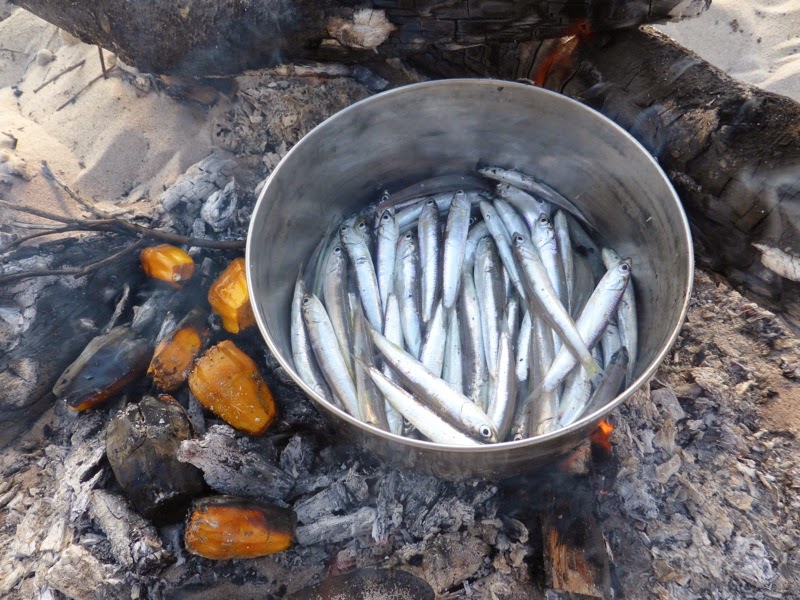 We sucked the sweetness out of the pandanus kernels after they were roasted for about 15 minutes. Although a modest pleasure, we think there must be a better technique to eating this food and getting more from it. If anyone has any suggestions please let us know. 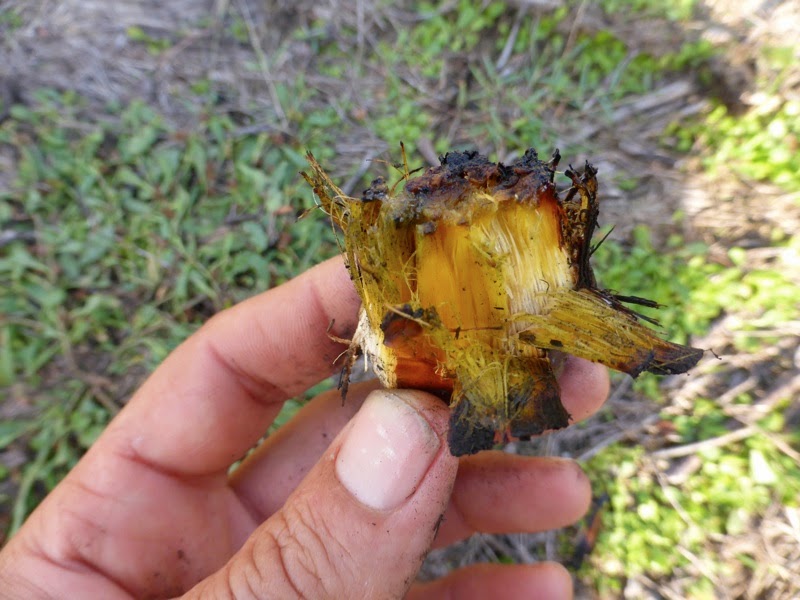 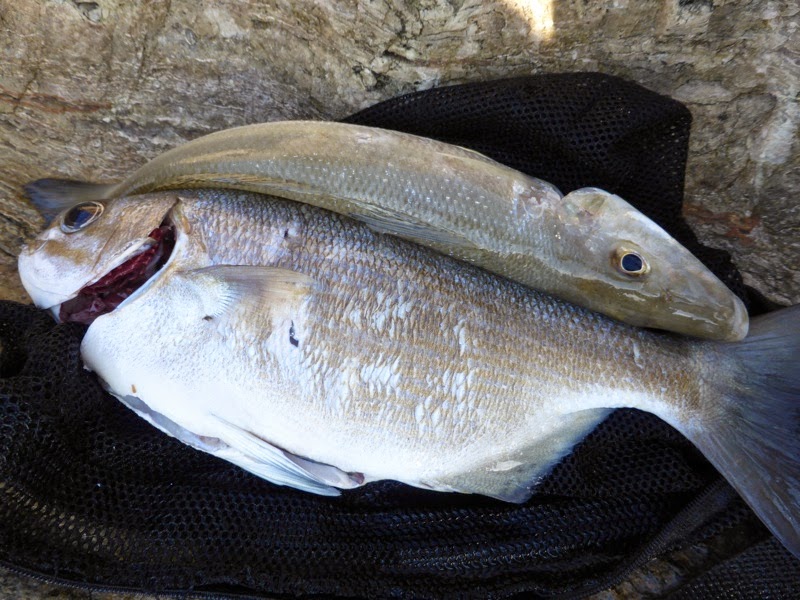 and fish we caught by rod and line also included sand whiting and a new one for us, swallowtail dart (Trachinotus coppingeri). A surprising delicacy, easy to catch, tasting even better than the whiting, which is an excellent eating fish as well. 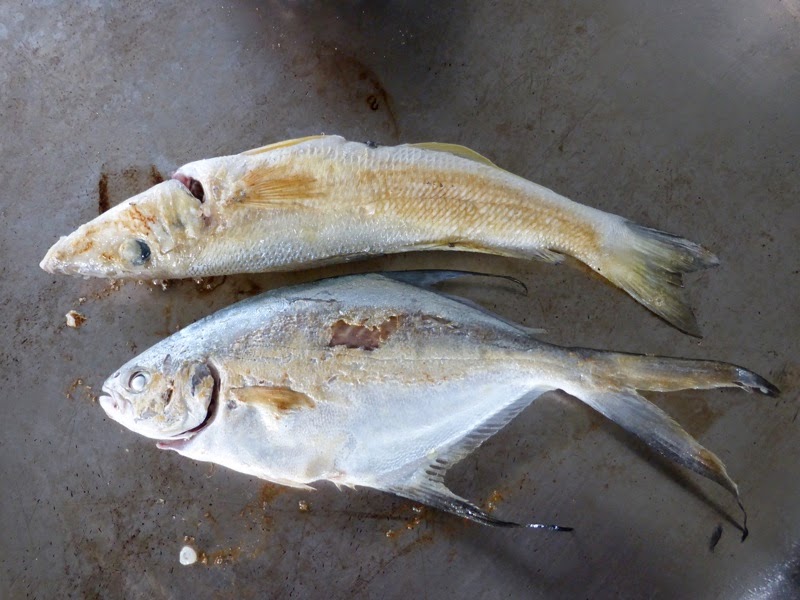 We met Megan from Quandamooka Yoolooburrabee Aboriginal Corporation and she generously passed on the knowledge required for eugarie or pipi (Plebidonax deltoides) gathering and cooking. We walked for a few kilometres down Main Beach with our dandelion root foraging tool, setting off an hour before low tide. Then suddenly, 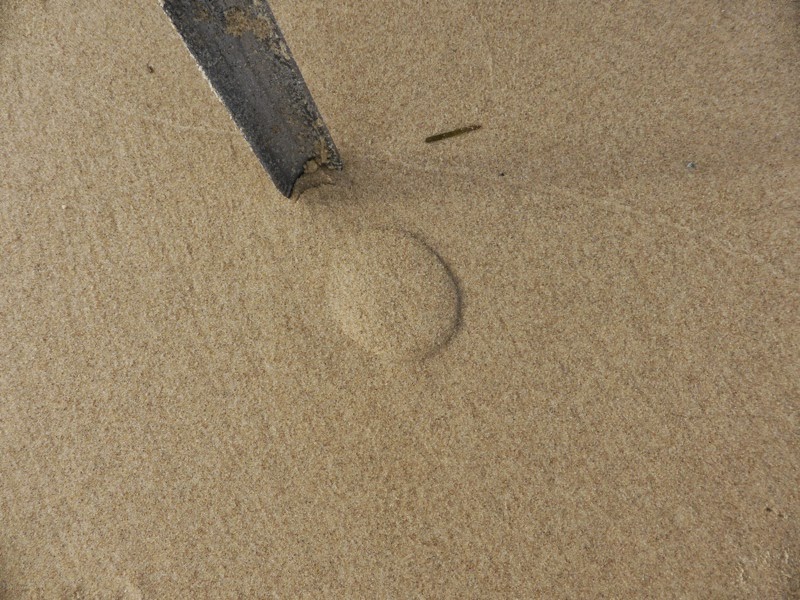 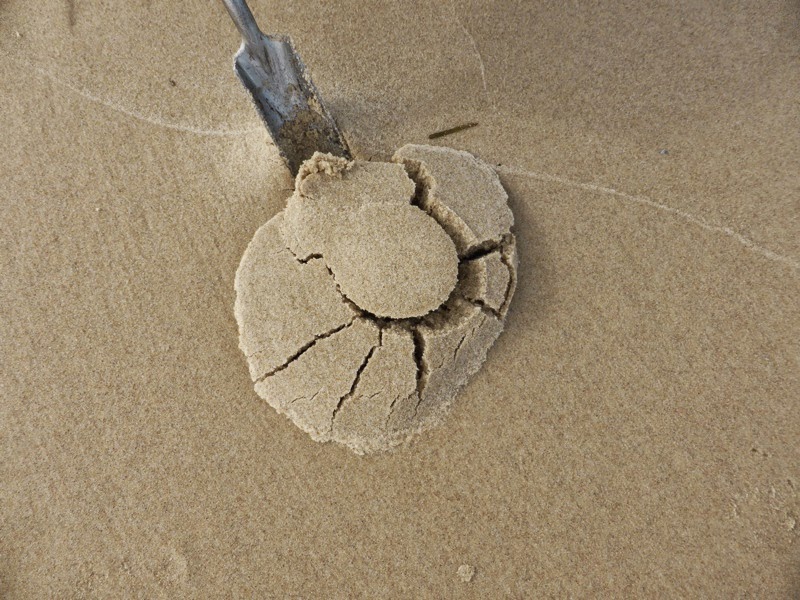 and lo and behold, eugaries! 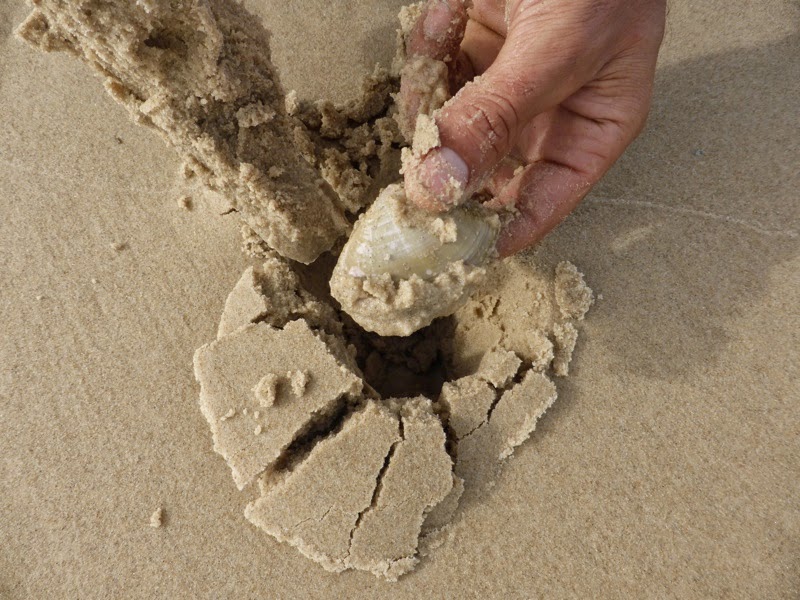 We harvested enough for lunch and some for the evening's fishing. 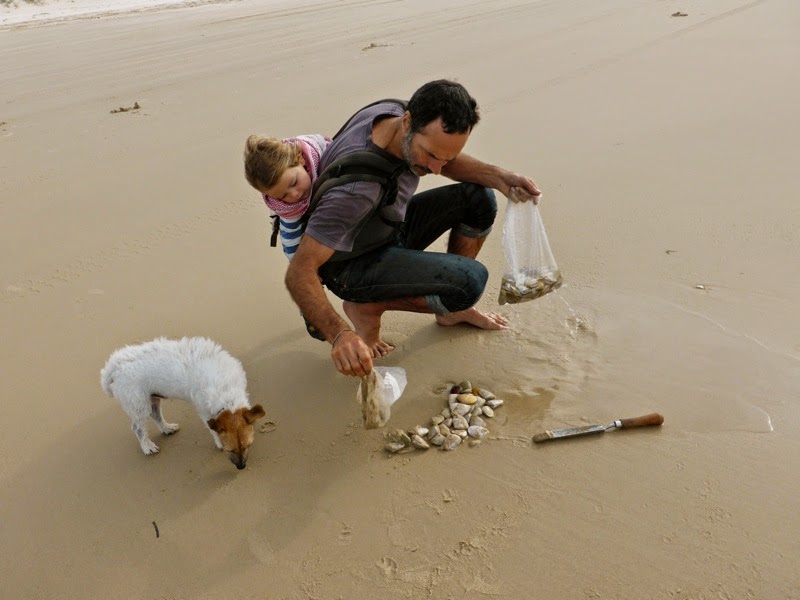 Megan told us the best way to cook them was straight on the coals of a small campfire. This really was a Minjerribah treat. 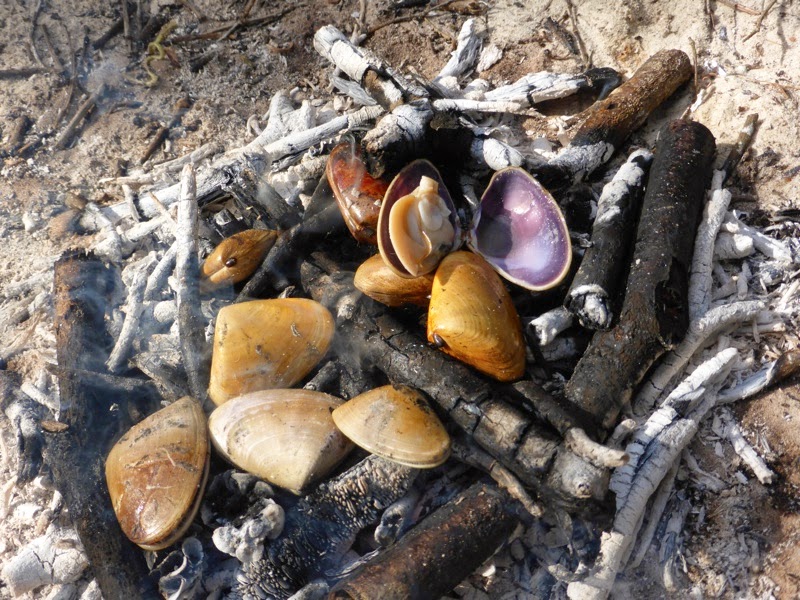 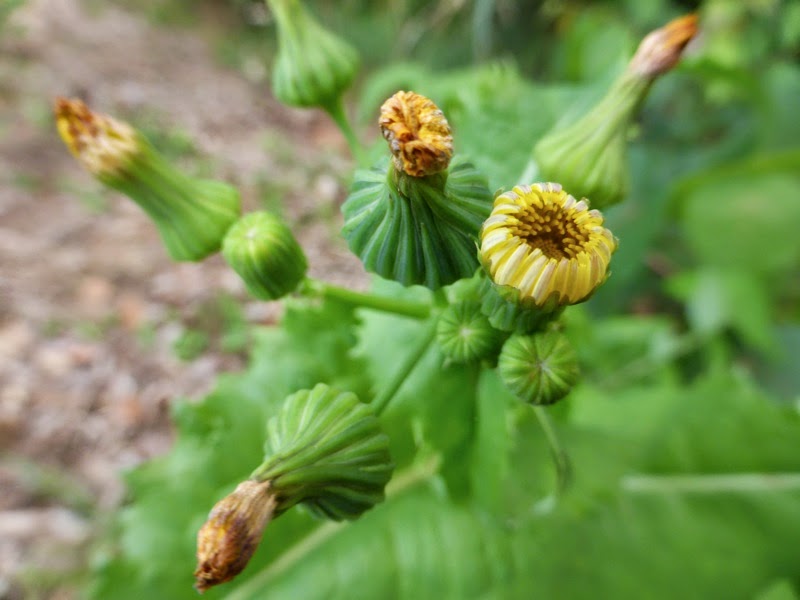 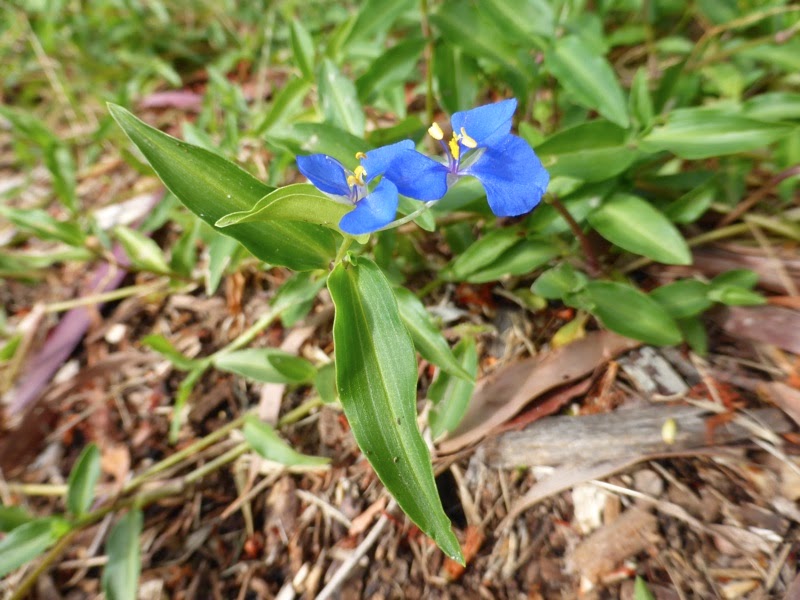 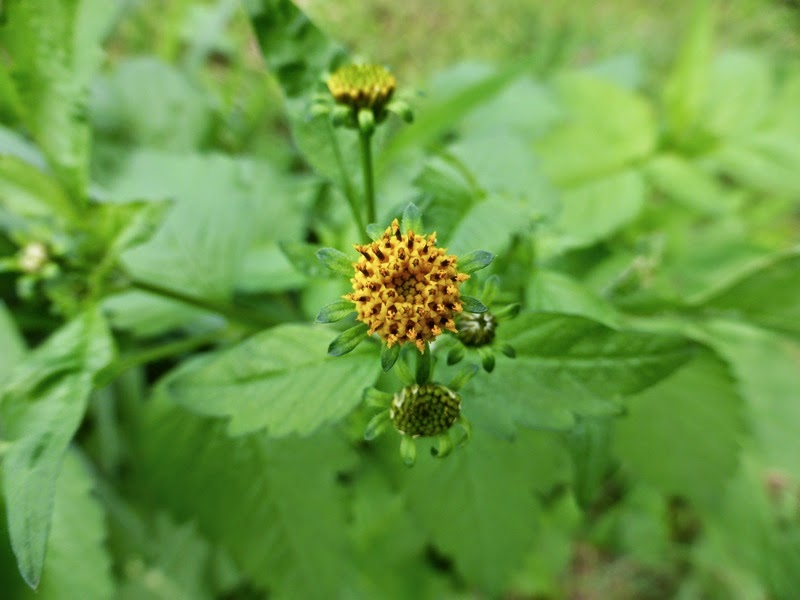 We’ll be sad to leave this beautiful island, but we’ll take with us many delightful experiences. 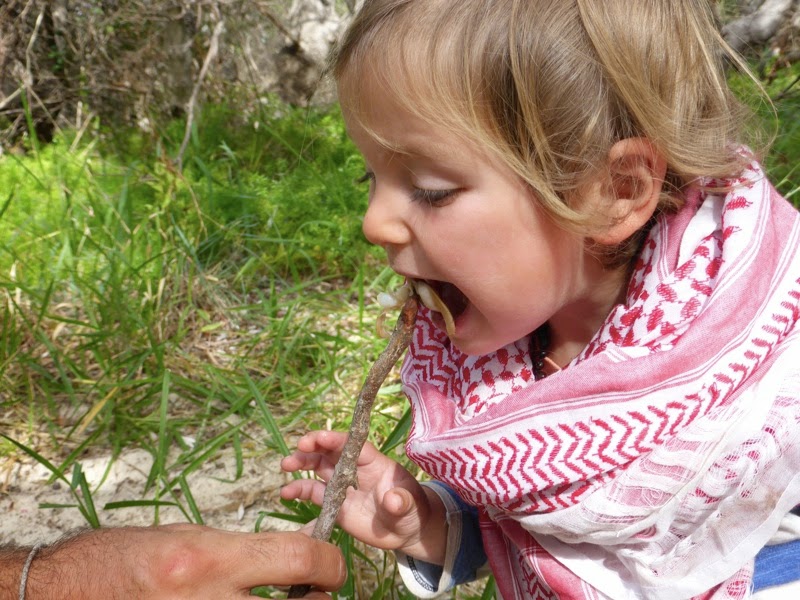